What is Solar Energy and How Does it Work?

The Sun is a star that generates its energy by nuclear fusion of hydrogen nuclei into helium. When merging two protons in a nucleus of deuterium to create a helium nucleus, photons are released. This particle transmits the light beam to Earth.

The photons that reach the earths surface fuel our planet and are ultimately responsible for our weather and life on earth. Enough solar radiation hits the surface of the planet each hour to theoretically fill our global energy needs for nearly an entire year if we could capture and harness that energy.

Photovoltaic (PV) cells, otherwise known as solar energy cells, are especially designed to capture the solar radiation that reaches the earth's surface and convert it into electricity.

These PV cells are connected together into a rectangular enclosure called a PV Module. If you place a PV module outside, the incoming sunlight passes through an anti-reflective coating to layers of conductors, one negative, one positive, and a semiconductor layer, typically crystalline silicon. 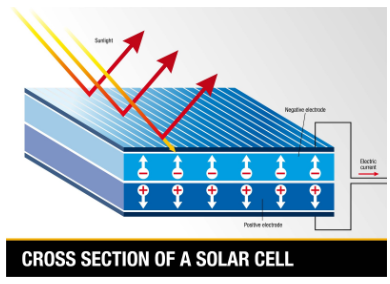 The photons of light strike the semiconductor atoms and negatively-charged electrons are knocked loose from the atoms, resulting in free electrons and positively charged ions of the semiconductor. The loose electrons are attracted to the negative conductor, while the ions are attracted to the positive layer. The flow of these electrons generates an electrical Direct Current (DC). This process is known as the photovoltaic effect. This DC current is then converted into Alternating Current (AC) using a DC to AC power inverter, in order to be used with the electric utility grid and to power our homes and businesses.

These inverters are connected to a combiner panel that consolidates wiring. The wiring then goes to an AC disconnect switch on the side of the building next to the meter and is then connected to the existing electrical service provided by the utility.

Solar energy is clean energy that has no emissions and is renewable, utilizing the worlds most abundant energy source; the sun. With new technologies and lower costs, solar has become incredibly competitive against other energy technologies in the marketplace.